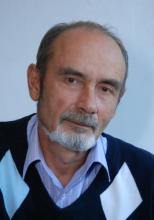 Electrophysiological experiments have shown the high sensitivity of the skates' Lorenzini ampullae to magnetic field changes. The data obtained allows to conclude for the first time that the Earth's magnetic field can be perceived using these receptors. Based on behavioral, morphological and electrophysiological studies, it was shown that the abdominal sensory organ (ASO) of bivalves has a vibration detecting function in the aquatic environment and is similar to acoustic-lateral system of vertebrates.

The data obtained on the structure of the ASO sensory cells' hair apparatus, the mechanical properties of sensory cilia, the lipid and polypeptide composition of its membrane, the sensitivity regulation mechanisms allows us to formulate a hypothesis that the mechanism triggering the process of mechano-bioelectric transformation is based on the lateral interaction of sensory cilia. It was shown that the reproduction violation of bottom invertebrates mass species (sea urchins and bivalves) occurs under the influence of both anthropogenic pollution and climate variations. For sea urchins and bivalves that live in conditions of chronic pollution, poor quality of germ cells is the reason for the appearance of non-viable offspring.

Since the formation of germ cells is the most sensitive stage of the life cycle, it can be said that this stage mainly determines the level of reproduction in areas subject to anthropogenic impact. It was shown for the first time that under conditions of anthropogenic pollution, the timing of gonad maturation and, consequently, spawning in sea urchins is shifted from autumn to early summer. We observed the lack of spawning in sea urchins living in areas not subjected to anthropogenic pollution, when instead of spawning, mass resorption of mature gametes occurs. Thus, for the first time, it was shown for marine invertebrates that spawning does not occur automatically after maturation of gametes, but requires favorable environmental conditions.

For the first time, a set of methods was developed and applied, including analysis of the state of gonads, video recording of spawning behavior of sea urchins, and measurement of environmental parameters (temperature, salinity, oxygen and a-chlorophyll concentrations – an indicator of phytoplankton content, PAR, and tidal level) in the habitat.

The hierarchy of biotic and abiotic factors regulating spawning in natural settlements of S. intermedius was established: 1) the main factor is phytoplankton, in the absence of which spawning does not occur; 2) increasing the concentration of phytoplankton stimulates motor activity and spawning of males, whose sperm is necessary to stimulate the spawning of females; 3) the dark time of the day and the phases of the full and new moon are additional factors that increase the probability of spawning. It was presumed that phytoplankton may be the main factor regulating the reproductive cycle of sea urchins , and that the shift in the timing of their spawning in conditions of anthropogenic pollution is caused by eutrophication of the marine environment, which increases the probability of early spawning. The results are important for understanding how environmental changes, associated with interannual climate variability and anthropogenic pollution, affect the productivity of coastal ecosystems.

The need for nutrition and predators avoidance and successful reproduction are considered the essential evolutionary selection factors of the animals' behavioral and morphological characteristics. The methodological approach developed, including the analysis of the gonads state, video recording of sea urchins' spawning behavior and environmental parameters measurement can be successfully used to study the mechanisms developing in the course of evolution that ensure the existence of aquatic organisms. It allows to achieve the same accuracy in field research that is typical for laboratory experiments, but it does not have any disadvantages connected with the difficulties of approximating the results of laboratory research to the actual living conditions of the research objects.