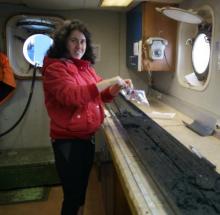 N. S. Syrbu published 11 works in foreign and Russian research journals). Research materials were successfully presented at international and all-Russian conferences where they were highly evaluated by specialists. The main provisions of the research were reported and discussed at: 12 International, eight Russian and 14 regional conferences.