On May 29, 2020, due to a breakdown at a fuel storage tank at Norilsk-Taimyr Energy's Thermal Power Plant No. 3 (owned by Nornickel), more than 17,500 tons (21,000 cubic meters) of diesel fuel spilled into local rivers and onto the ground near Norilsk. The incident is one of the largest oil spills in the history of Arctic exploration.

Images taken on May 31 and June 1 from the Sentinel-2 satellite show spots of oil product pollutions (red-colored water) that moved along the Ambarnaya River.

On June 2-6, the area was covered by clouds, which hampered observation of the further spread of spilled fuel. Images taken on June 7 and 8 still demonstrate some contamination areas. White dots on the river banks and ponds are the infrastructure objects used to collect petroleum products and clean-up the environment.

It should be noted that this accident, although a major one, is far from being the first one. An analysis of Landsat satellite data from the U.S. Geological Survey regularly revealed red discoloration in the waters around Norilsk. These areas are very noticeable on high resolution images and can be mapped rapidly using remote sensing techniques. 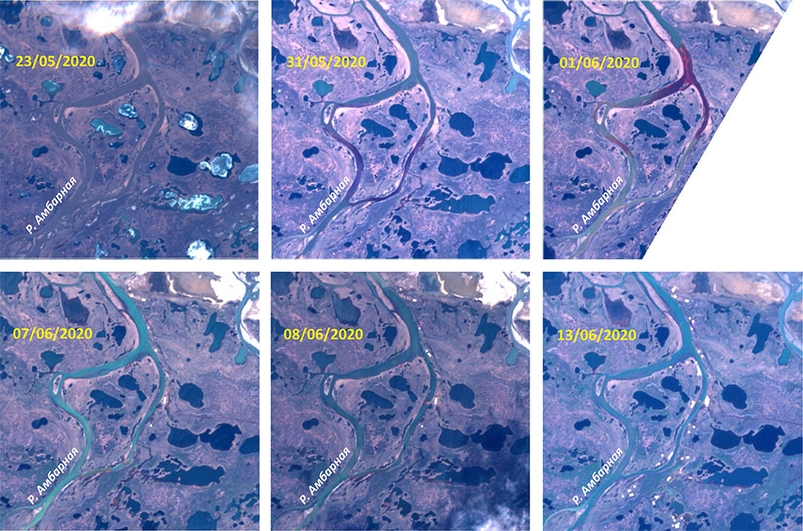 A series of Sentinel-2 satellite images of the Ambarnaya River in the oil pollution region. The images were downloaded from the European Space Agency Sentinel data hub. Period: May 23 - June 13, 2020.

“An environmental disaster is clearly visible on six images. On May 23, before the disaster, the river was clean. Then (the accident happened on May 29), in the image for May 31, local oil areas, still small, are visible. June 1: the spill area is most massive, still no cleaning works carried out, but we can see an attempt to prevent the spill spread with specially constructed booms. On June 7 and 8, four round tanks for collecting oil and two or three camps are visible; June 13, about 17 collection tanks on both sides of Ambarnaya river and about eight base camps.

The spill concentration on the water surface has decreased. But it is too early to draw conclusions, since this requires information on the state of the aquatic and terrestrial ecosystems. No matter how carefully the spill is collected, it is impossible to completely remove it. It is obvious that for many more years the ecosystem will be restored at least to a relative norm. With such large-scale contamination, restoration and partial replacement of local flora and fauna will take several years. For example, initially, migratory birds and waterfowl will not settle, nest and feed in this area. When the residual oil is washed away by atmospheric precipitation over the years, diluted and partially carried to the ocean, then typical representatives of plankton, plants, and then fish, frogs and other things that birds feed on will appear. But that will take years.

The human can help if there is enough information about the environmental conditions and if the situation is constantly monitored. Therefore, it is necessary to create a group of specialists - hydrobiologists, ecologists, botanists, zoologists - who will conduct an initial survey, develop a set of compensation measures and monitor the situation development.”